Pick up and lift.

Q: What was your creative process with this film?

I took a trip to Ireland a few years ago and learned about some familial roots in Donegal, where my great grandparents and their families were born and raised. When I came home from the trip I knew I wanted to make a film that explored family lineage (and sometimes the gaps we have in our family trees), the strength of women in my family, and the radical history of Ireland and all the struggle that its’ landscape represents. I did some research and found some found footage home movies on 16mm from the 1950s which I then spliced together with an educational 16mm film I found about Ireland’s landscape. Using a simple light table and some permanent ink, I colored on the film in certain spaces, leaving my literal fingerprints and marks on the celluloid and therefore also on the landscape.

Q: What does the title “Ceallaigh at Kilmainham” mean?

“Ceallaigh” is my name “Kelly” in Gaelic which is the original Irish language which some parts of the country still speak today. The language was almost wiped out by the British government which discouraged its’ use as it sought to control Ireland during Ireland’s fight for independence. Kilmainham is the name of the gaol (jail) in Dublin where many Irish revolutionaries were tried and killed for their participation in the Easter Uprising and their fight for Irish independence. I learned the Irish origins of my name right outside of the Kilmainham Gaol, which greatly affected me and which I explore through connections between family, strength, and perseverance in the film.
I was born in the United States, and my ancestral roots and great grandparents are from Donegal, Ireland.

Tara Merenda Nelson is a Boston-based filmmaker, curator and installation artist. Her work has been exhibited in galleries, museums basements and backyards throughout the United States and Canada, including the Museum of Modern Art in New York. In February, 2011, she curated a four-city tour for French experimental filmmaker Rose Lowder. She has worked as an intern at the Harvard Film Archive and WGBH’s Antiques Roadshow, and holds an MFA in Film/Video from the Massachusetts College of Art.

Statement about this work:

A journey between layers of corporal consciousness, Hull explores the physical memory of trauma, and the psychological repercussions of a surgical disaster.

Your reason for creating this work:

At the age of 34 I had surgery that resulted in the unexpected loss of my uterus. Since the surgery, the psychological relationship I have to my body has changed. My body remembers things my mind cannot. Hull is an attempt to recover what was lost.

Can you tell us how this film came about?

In 2009 I had surgery to remove fibroid tumors from my uterus. The surgeon was confident that the surgery would be “routine”, but there were complications. I hemorrhaged and lost a tremendous amount of blood. I also lost my uterus. I was 34 years old. After this happened I was haunted by memories of the surgery, though I could not really remember anything. It was as if my body were remembering what had happened, and slowly revealing the experience to my conscious mind. I made HULL as a way to honor my body-memory, and to manifest the memories I could feel but could not see.

Do you want to say anything about the body, or illness, or the female body?

Fertility and infertility are powerful forces in the lives of women. These issues are treated as ailments in our culture, rather than concerns of humanity. I am interested in how fertility shapes a womans’ identity, and how infertility changes that identity.

Is there anything else you want to say about your creative process?

I had a completely different aesthetic in mind for HULL, but during production I realized that something was wrong — my conscious mind was not paying attention to my subconscious. So I stopped “planning” what I would shoot and let my body guide me towards objects. I never would have chosen to work with dolls or toys, but they were the objects that felt most accurate to me. Later I realized that this film was a form of play-therapy, like the process that children go through as they have experiences in the world that they don’t understand. Each object in Hull plays a very specific role, and I am still deciphering the code that I invented to help myself remember.

Q: Did you write the text for KORONA? What was your inspiration?

It has been nearly two years since I wrote the text for KORONA. I was inspired by the novel “Das Marmorbild” by Joseph von Eichendorff from 1818. In this novel the goddess Venus plays an important role. I had been working on female goddesses for some months, using different media and materials, when I wrote this text – most of it on one day. But after deciding that I was going to use it for the film I edited it and added new parts.

I write a lot more then I use in my work and most of what I write is never used again or, like in this case, a lot later then it is written.

Q: Please tell us about your creative process, why so little image, using black screen, and where is the final image derived from?

This piece is the product of a lengthy process. In KORONA, you see images from July and November 2011, and February and late April 2012. I had not planned or scripted this film, I was shooting what I thought I would be able to use for something later. But this “something” was far from being defined.

When I reviewed my footage of the last year I slowly started constructing KORONA over a period of half a year. The final image was shot at a lake near Cologne, Germany, and shows my close friend Alisa Berger handing me a necklace made of stones collected in Denmark. This is a reference to Brisingamen, the necklace of the goddess Freja.

Many more images were considered in the making of KORONA, but I decided that I wanted the main part of the text to stand for its own and therefore focused a lot on how it is read. Working on this film brought certain realizations about my work; specifically, I aim to focus more on text-based work. In some ways, the black screen and slow rhythm the time it too k me to realize what I was doing myself.

Made at a process cinema workshop in Cuba, Push / Pull / Recover is a meditation on motion through stillness with breath. Shot in single frames on 16mm and hand painted.

Push / Pull / Recover was made in Cuba where I was assisting Phil Hoffman facilitate a process cinema workshop. The school is about an hour drive from Havana. A large gate surrounds the grounds, and most students live there for three years. I was fascinated by the idea of the school as this rich space for creativity and imagination but also as a kind of island in itself. One student described the space as a kind of aquarium – everyone sees you and you see everyone, you develop a different definition of privacy.

There is an old and mostly neglected darkroom that we took over and a telecine that still works. Phil brought all of the chemicals for processing and enough black and white high con film for everyone to shoot a few rolls. We showed students how to use the bolex and hand process their images.

There is a large pool at the school. Every day I would go for swim – I thought of the pool as a container, a space that I could measure my body against. Much like the grounds of the school itself or the country defined against a body of water. Swimming can be a kind of meditative experience but there is also conflict inherent to the act of swimming, the body cutting against water, and the struggle to find rhythmic breathing.

I was interested in creating a sense of this tension through the illusion of a continuous swim. In order to bypass the twenty-eight second bolex wind, I decided to build the film through single frames. Tara Khalili and Reiner Bello- Sanchez walked the length of the pool taking single frames as I swam alongside. In total we shot about 30 seconds of material. Once it was transferred on the Telecine I was able to digitally manipulate the duration of each frame. In terms of film it was a very economical way to work but not in terms of time. Manipulating each frame and finding the rhythm, particularly with the sound was very labor intensive.

The film was hand-processed and painted over. The result is a swim through chemistry.

I shoot with the bolex frequently and love playing with high con stock – it has the uncanny ability to transform the world. Using it I am reminded of the Paul Éluard quote, “there is another world but it is in this one”. This was my first time manipulating single frames and painting on film.

I am finishing a new film. At an estate sale in Alberta, I came across some of the only archival film footage of dinosaurs. This discovery challenged everything I thought I knew about deep time.

It was really cool to be part of AXW – thanks for including me in this project. 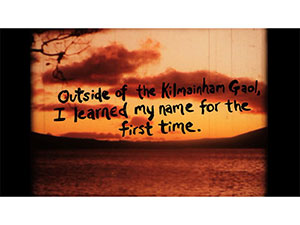 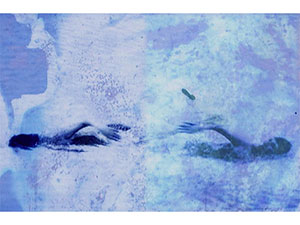 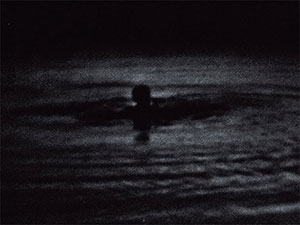 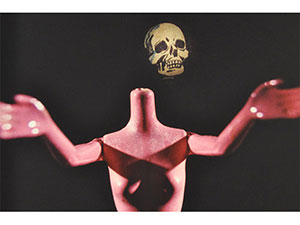